For those who know, one year ago today I lost my partner of over twenty-two years, Anthony “Skip” Turyonas Jr.  We were going to the store so he could buy me roses.  He was to go on a snowmobile trip for the weekend and wanted to be sure I had the traditional Valentine’s Day gift.  We had stopped for dinner and while waiting for the check, mid-conversation, he collapsed.  We buried him that Saturday, just before the snow storm.  It happened to be Valentine’s Day.


Today marks the end of all the “firsts”… the first Christmas, the first birthday, the first anniversary without him.  I am still shocked and saddened.  Intellectually I know time has passed, but it still seems so fresh and unbelievable to me.  When it first happened I counted the minutes and hours.  I stayed up all night and watched the stars and then the sunrise; the first sunrise in the world without him in it.  In the last year I literally counted the days, weeks and months.  Sadly, from this point on I will start to count in years and this makes me anxious.  Our time spent together will fade into the past and there will be no new memories.   I know he will always be a part of me, but I am afraid that over time I will think of him as less relevant. That just doesn’t seem fair to him.  He was quiet, funny, humble, shy and honorable.  He was the greatest person I will ever know and I miss him terribly.


He had two loves, stock car racing and me. I hope not in that order.  In an effort to remember him as he was and to honor him, the following is from the April 16, 1992 edition of the Hunterdon County Democrat.  The article “Turyonas Is Looking for Sportsman Victory” is by Fred Voorhees.  This story was published just before we started dating.   Skip would end up racing for 21 seasons at Flemington Speedway.  His one feature win was in his final season on July 6, 1996 in the Troyer chassis mentioned below. The year this article ran, he came in second in points in the Sportsman division.

“Hampton’s Skip Turyonas is now entering his 17th season of local stock car racing.  Yet, he has come up short of achieving one of his main goals set in 1976.  Turyonas has yet to capture a feature event checkered flag.  He hopes that will fade into the past this season with his purchase of a 1991 Troyer DIRT asphalt chassis.


Turyonas got his introduction to racing when he was in grade school at the now defunct Nazareth half mile speedway in Pennsylvania.  Further along, lending a hand to friend Ty Constantino on his race car while in high school assured him that racing was in his blood.


Turyonas entered the 1976 rookie division at the Flemington Speedway and was on his way.  Since then he has been the owner and driver of his yearly racers.  Last year at Flemington Speedway he went to battle with a converted 1989 Olsen dirt track chassis.  For the 1992 season he has purchased the Shammy Shine racing team’s car from last season because he felt that was the way to go.


The Flemington opener on April 5 saw Turyonas have problems with the car in qualifying and not make the main event. “For some reason all the brakes locked up in the heat race,” he said.  “I never had anything like that happen before.  We also had an electrical problem and the engine would not run at speed.  These problems are hopefully corrected now.”


Still, comparison to his previous car showed Turyonas that he will now be able to up his cornering speed thanks to the new chassis and the Tony Feil engine under the hood and greater amount of stability the car now affords.


“From an owner’s standpoint, I like the asphalt better that then old dirt surface because everything stays cleaner and I could stretch the tires longer,” he said.  “There is also less weekly maintenance.  But from the driver’s side, I liked the dirt better.  When a car handled well there was no thrill like going around Flemington.  I’m also less comfortable yet on the asphalt.”


Besides the Flemington Speedway, Turyonas has also competed on the old Nazareth half mile as well as the presently asphalted one mile track when it was dirt.  But Flemington remains his favorite track... “It’s a real challenge.”


Locally he admires eight time Flemington champ Billy Pauch.  “He can drive anything, anywhere” says Turyonas.  Nationally he leans towards A.J. Foyt because he tells it like it is.  Working Monday through Friday at Bemis in Flemington as a process technician, his racing aspirations are simple.  “I’m happy and content running at Flemington,” he said.  “The fans are great and I hope to be able to do a good job in the modifieds if I should make the move up from the sportsman division.”


With the proven success of the Troyer chassis he now owns and the ample experienced crew on hand each week, Turyonas should not have to wait much longer before he crosses under that checkered flag ahead of the field.


If he can keep his No. 8T running as well as his beautiful blue, white and red machine looks on the track, the wins will surely come.”

Getting Older, Getting Better?

By Rosalind Davis
They warned me it would happen, but I refused to believe.  Then one day it came about.  It was so stealth, so unassuming, that it took me by surprise.  It was an ordinary Saturday, two days before my fiftieth birthday.  I went to the mailbox and opened it.  There with the water bill, an advertisement from a local accountant (it is tax time after all) and an LL Bean catalog, was a piece of mail wishing me a “Happy Birthday”.  The return address indicated it was from Washington, D.C.  Interesting.  Was it from the President?  Perhaps my local representative?  I was excited.  Up until this point the only birthday card that came for me was from my Chiropractor.  Carefully I opened it.  Then it popped out like snakes in a can!   Slowly, it dawned on me what the words spelled and they hit me like a two ton hammer: A-A-R-P.


How did they know?  Do they have some sort of old age spy unit out there detecting when the populous turns 50?  The mailer was my invitation to join, and if I join today I receive a free gift.  What is it?  A can of strained peas?  A bottle of Geritol?  Happy birthday indeed. 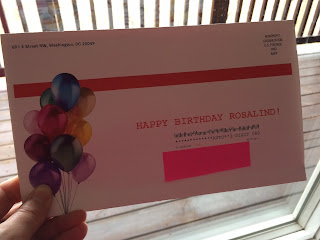 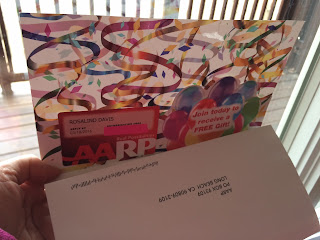